During the first week of April, I spent some time in the field monitoring the impact of dozerline construction during the 2021 fire season in the Pattison Inventoried Roadless Area. What I witnessed was the appalling disregard for the land’s unique natural, scenic and recreational values during suppression of the 2021 Monument Fire. What I also saw was a rugged and beautiful landscape with deep canyons, steep rocky ridges, beautiful mixed conifer forests and a spectacular mixed severity fire mosaic.

Although forest and fire managers used their discretion to implement damaging, often ineffective and unnecessary dozerlines in highly inappropriate locations, from a biological standpoint, the effects of the Monument Fire were highly beneficial. Overall, the 224,688-acre Monument Fire burned at 67% low, 29% moderate and 4% high severity. In the Pattison Inventoried Roadless Area, the fire largely maintained old forest habitats, renewed plant communities, increased heterogeneity with high severity burn patches, and reinforced the diverse patchwork of vegetation communities and seral stages across the landscape.

The proposed Pattison Wilderness is located on lower Hayfork Creek, a major tributary of the South Fork Trinity River and an important salmon and steelhead fishery. Hayfork Creek flows from its headwaters near Wildwood, California and the Chanchelulla Wilderness into the broad Hayfork Valley. Downstream of Hayfork Valley, the stream runs into a steep, rocky canyon and quickly enters the proposed Pattison Wilderness Area and proposed  Lower Hayfork Creek Wild and Scenic River. Hayfork Creek then winds west through scenic gorges and spectacular mixed conifer forests to the South Fork Trinity River in Hyampom, California.

Certainly worthy of additional habitat protections, the Pattison Inventoried Roadless Area was recently proposed for Wilderness designation in Jared Huffman’s Northwestern California Wilderness, Recreation & Working Forest Act. This legislation, which has passed the House and is pending in the Senate, would designate additions to ten existing wilderness areas and create eight new wilderness areas in northwestern California, including the proposed 29,451-acre Pattison Wilderness Area. The legislation would also designate 379 miles of new Wild and Scenic River, including over 16 miles of lower Hayfork Creek.

Although remote and relatively obscure, the area is also well loved by both residents in the surrounding area and visitors to Camp Trinity and Bar 717 Ranch, a wilderness youth camp at the edge of the proposed Pattison Wilderness Area. Founded in 1930 by Grover Gates, Camp Trinity is the oldest accredited co-educational summer camp in California, and a wonderfully beautiful place to visit.

At Camp Trinity, children have learned respect for nature, backwoods homesteading and land-based skills for over 90 years. They have also learned to swim and fish in Hayfork Creek and have hiked into the deep canyons, ancient forests and rugged ridgelines of the proposed Pattison Wilderness. For so long, the area has provided the benefits of wilderness without official Wilderness designation. The area has also influenced generations of children to love nature and understand its intrinsic value.

The rugged, rocky ridges dividing the Trinity River from Hayfork Creek rise quickly to the over 5,000′ summit of Pattison Peak, with views extending from the Trinity Alps to the Yolla Bolly Mountains and across the South Fork Trinity River watershed. Protecting both the Pattison Wilderness and lower Hayfork Creek Wild and Scenic River would maintain the area’s prominent natural character, scenic beauty and isolated wildlife habitats. The area deserves full wilderness and Wild and Scenic River protections, so future generations can continue to enjoy the undeveloped nature of the region. 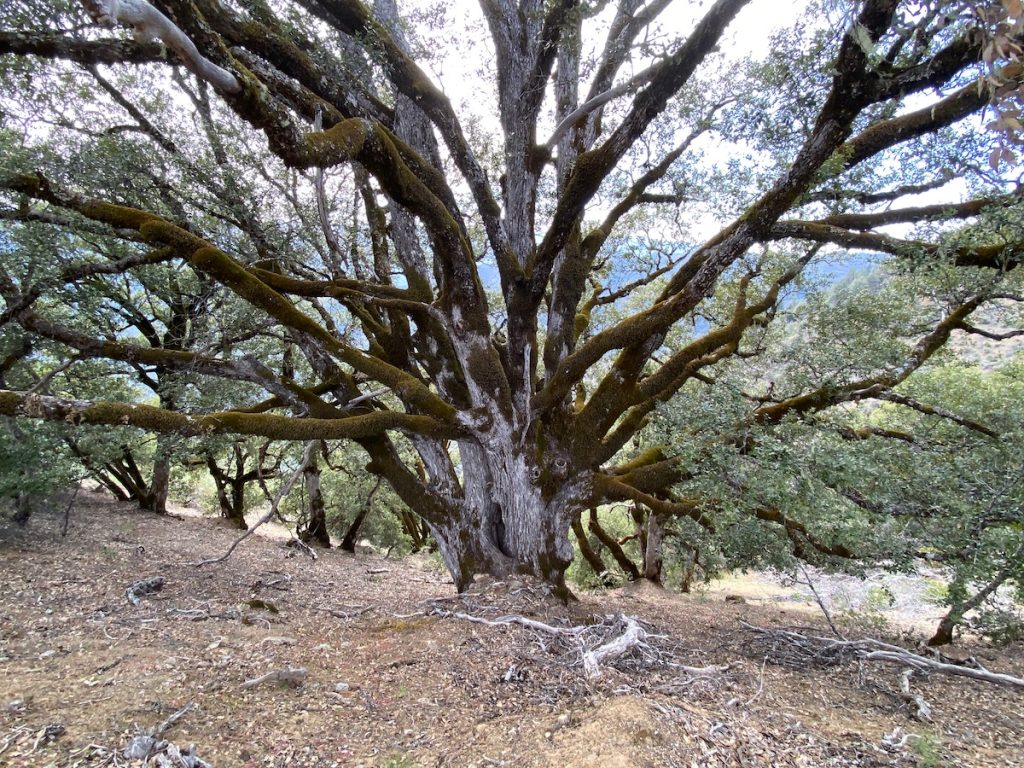 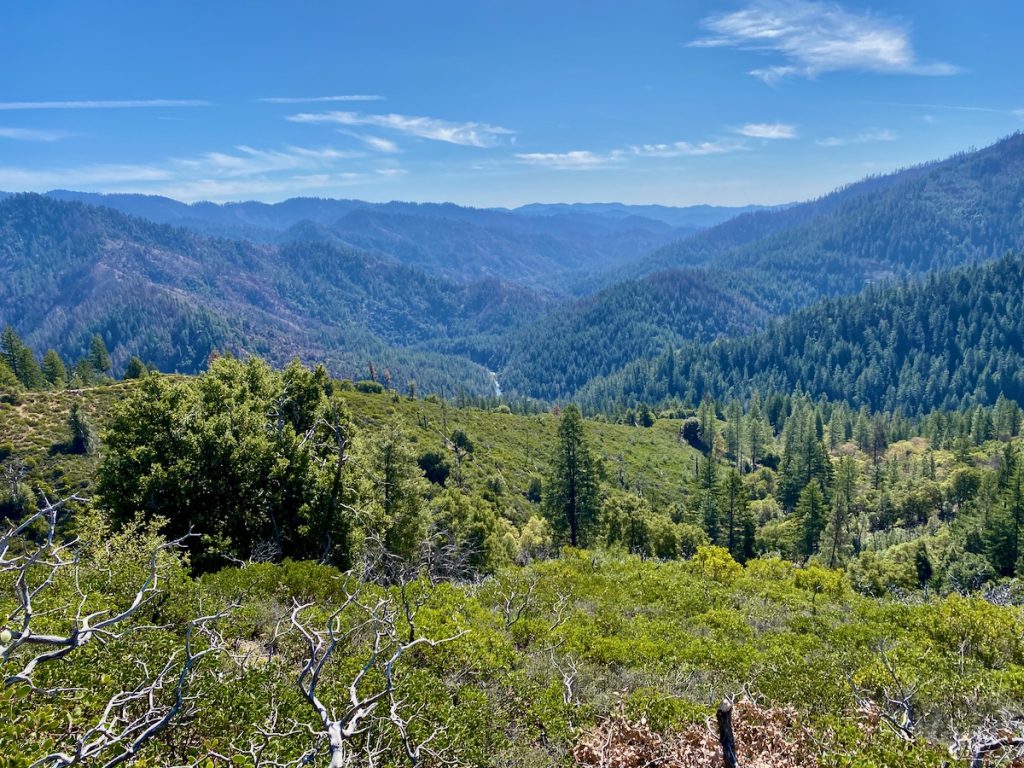 A view from Pattison Ridge into the Hayfork Creek canyon. 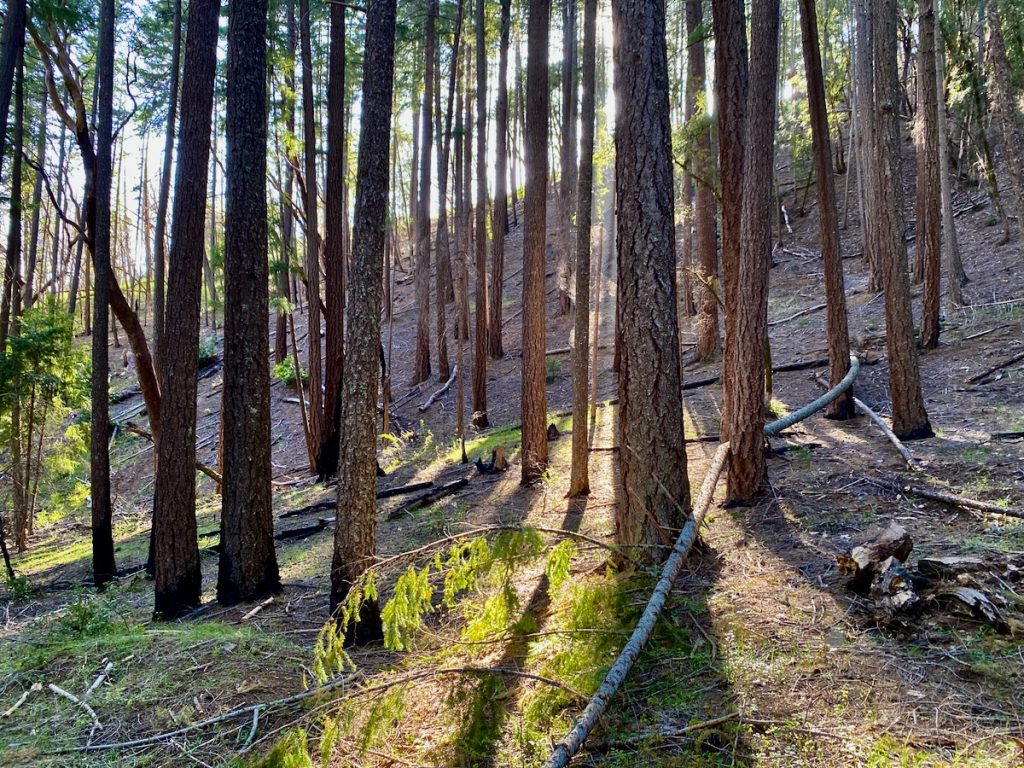 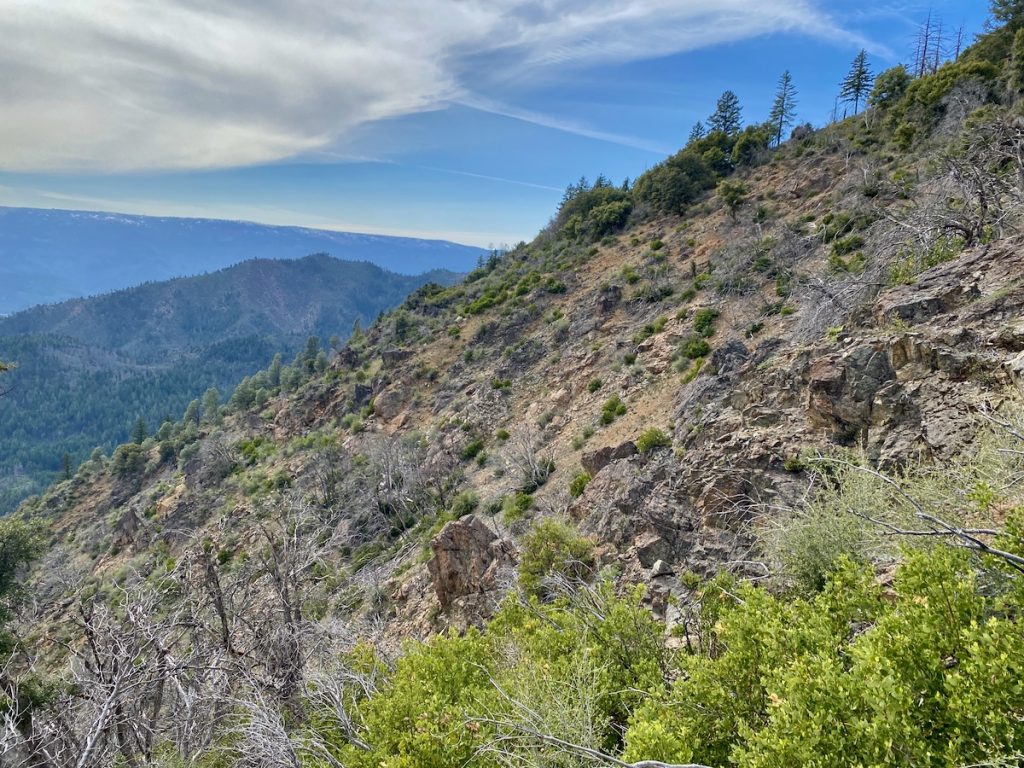 Although the Forest Service is allowed broad discretion surrounding fire suppression activities and the use of bulldozers in Wilderness Areas, National Monuments, Inventoried Roadless Areas, Botanical Areas, and other conservation-based land use allocations, the agency is also obligated under the Wilderness Act, in applicable Forest Plans, and in the Roadless Rule to maintain the values for which these areas have been designated. As noted in our previous post, and documented in our 2021 Region 5 Fire Report, these obligations are being routinely ignored, neglected or willfully abused across the region.

Despite significant conservation value and “pending” wilderness designation, fire managers from federal Incident Command teams, the Shasta-Trinity National Forest, the Region 5 Forest Service, and CalFire authorized and implemented a series of damaging dozerlines during the 2021 Monument Fire. These dozerlines were built throughout the proposed Pattison Wilderness Area, despite significant public opposition and the recommendations of Secretary of Agriculture Vilsak who ordered suppression crews to limit the environmental impact of fire suppression activities.

These dozerlines were etched into the wildlands, down every historic Native American, and later, pioneer trail in the region, and on nearly every major ridgeline in the proposed Pattison Wilderness Area. Built on incredibly steep slopes, these dozerlines were also “improved” or widened by fire crews to between 20′ and 200′ wide, doing immense amounts of damage to the area’s trails, scenic qualities, wildlife habitats and native plant communities.

Over the course of the last past ten years, the Klamath Forest Alliance’s, Klamath-Siskiyou Fire Report Program has published 13 fire reports, monitored over 20 fires and hiked hundreds of miles of dozerline. Never in all those year have we witnessed the kind of excessive, damaging dozerline creation that took place in the proposed Pattison Wilderness Area. Never have we seen dozerlines literally built into cliffs like they were at the heart of the Pattison, and never have we seen the land treated with such disregard.

Although the impacts of dozerline creation were severe and unnecessary, in time they will at least partially heal and much still remains to protect in the proposed Pattison Wilderness Area. Regional Forest Service officials have agreed that mistakes were made during the suppression of the Monument Fire and other fires in the 2021 fire season, yet absolutely nothing has been done to address the issue, create some level of accountability, or ensure that such impacts will not continue to occur in the future. Region 5 Forest Service managers must conduct a transparent review of fire suppression impacts in wilderness and wildland landscapes during the 2021 fire season and identify specific reforms that will protect cultural, biological and recreation values on federal lands, while promoting safe, effective fire management and fire containment strategies.

We recommend the following: 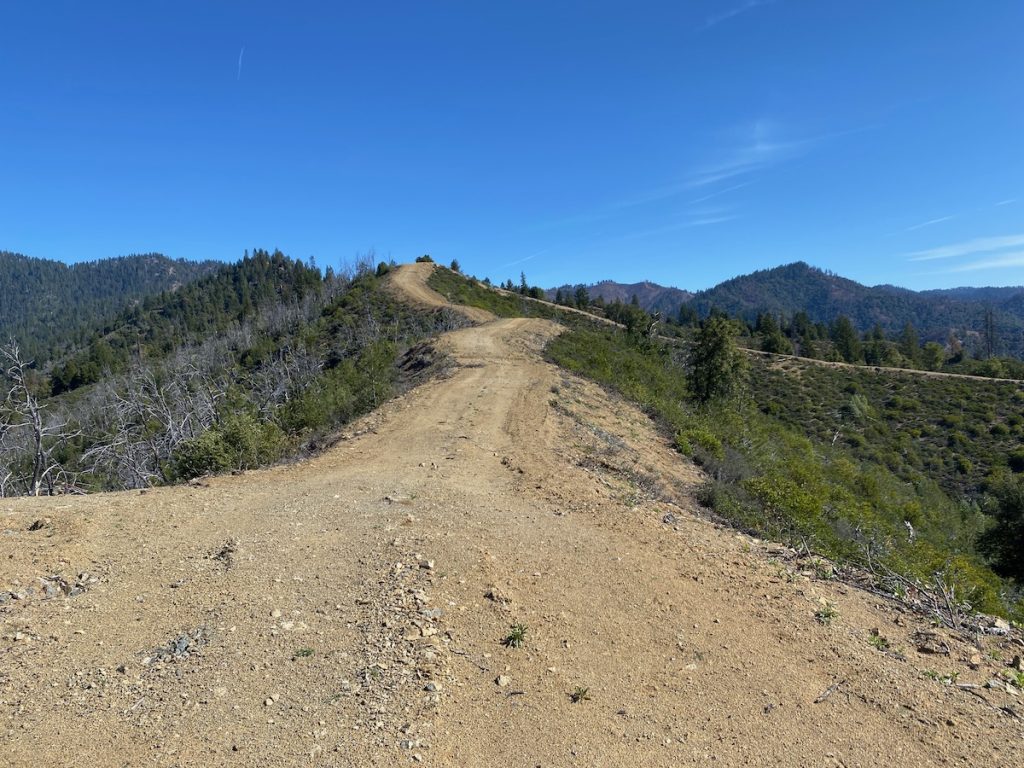 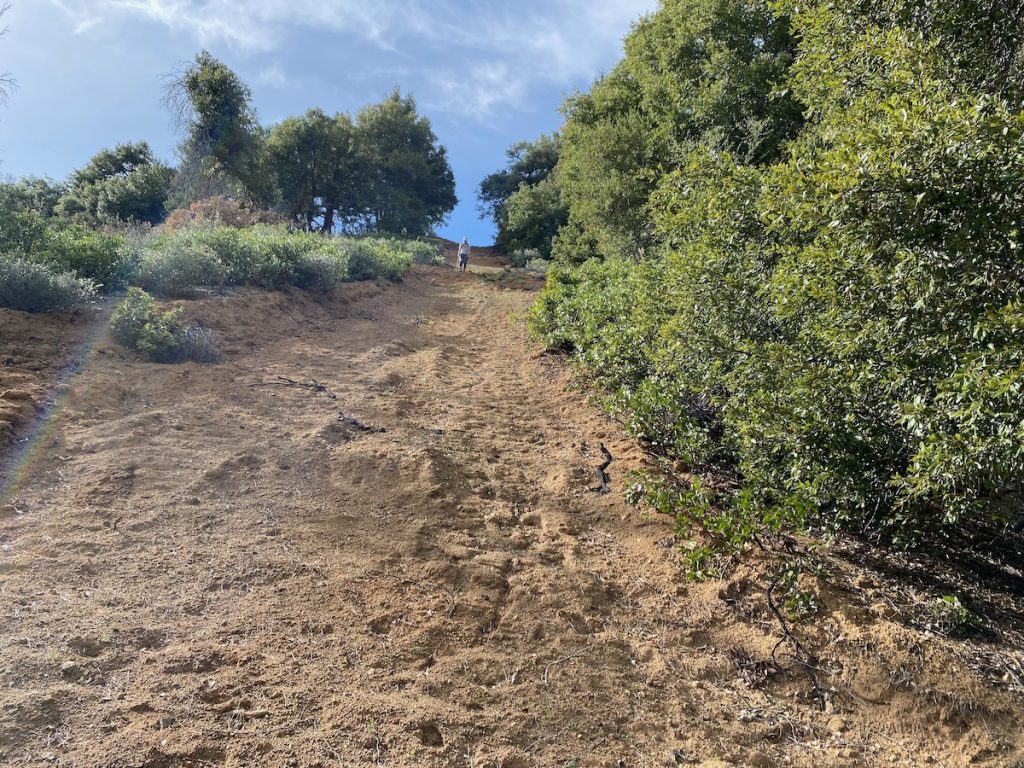 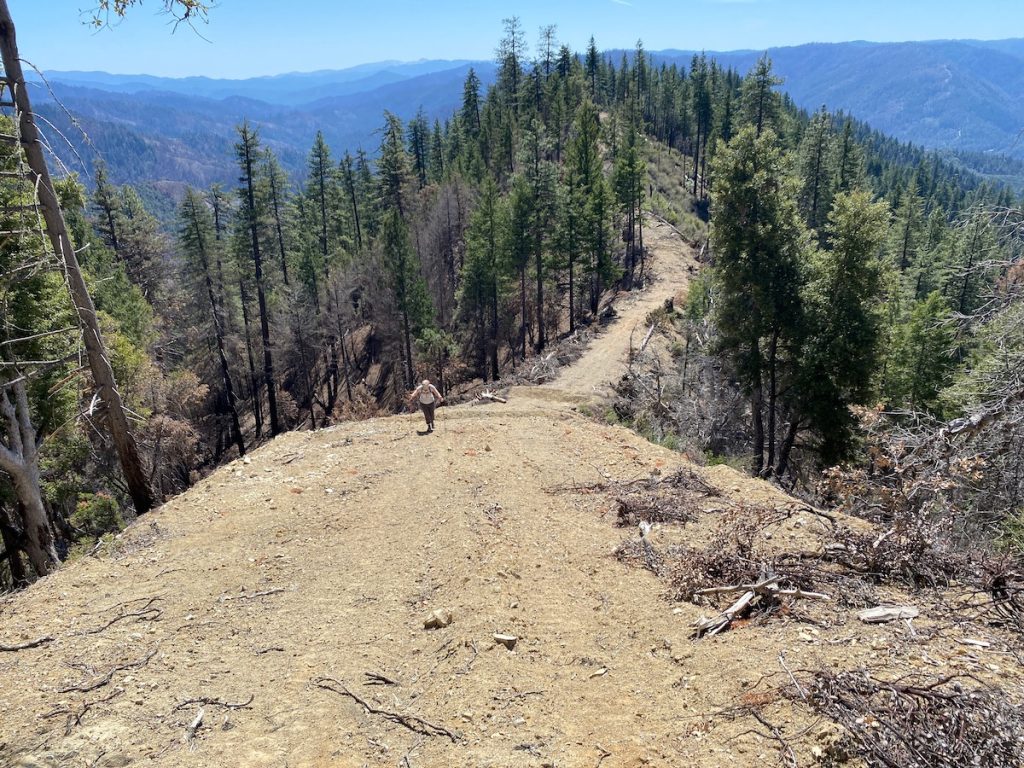 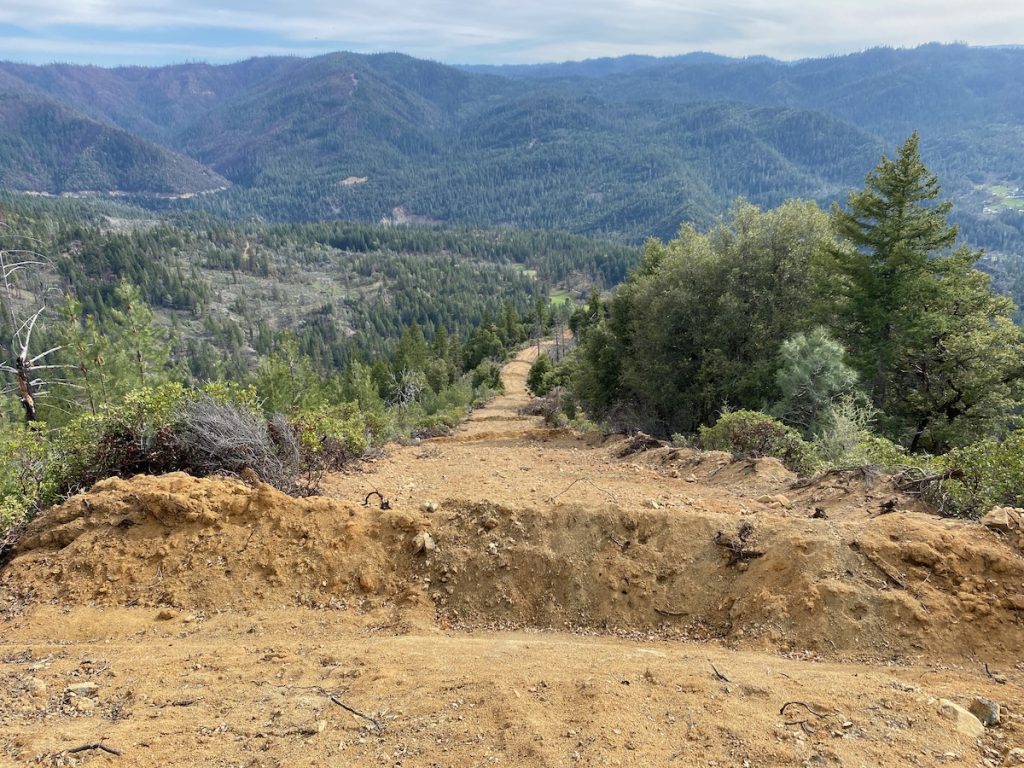 Please contact Region 5 Forest Service officials with your concerns about wilderness bulldozing during the 2021 fire season. Ask for a transparent internal investigation and after action review.