Klamath Forest Alliance has been busy in 2020 fighting for the wildlands of the Klamath-Siskiyou Mountains and building a movement to protect, defend and restore the natural world. Despite the hardships of 2020, we remain focused on the needs of the land and our commitment to protect the wild watersheds that surround us, and the forests that are critical for carbon sequestration and climate defense.

During these difficult times, more than ever, wildlands provide us solace. They provide a sense of humility and awe, a place of quiet reflection, and a place of inspiration. They are an escape from the increasingly stressful and unhealthy modern world, and they are the building blocks for a more sustainable future. Despite the importance of wildlands, they are increasingly threatened with mining, logging, grazing, off-road vehicle use and other forms of ecologically destructive public land management.

The Siskiyou Field Office of Klamath Forest Alliance is committed to defending the uniquely diverse, spectacularly rugged, and stunningly beautiful watersheds along the border of southwestern Oregon and northwestern California. This post highlights the work of KFA in 2020 as well as the projects and issues we expect to address in 2021.

The Crawford Timber Sale was proposed by the Klamath National Forest in a vital connectivity corridor between the Siskiyou Crest and the Marble Mountains Wilderness Area. Located on the Klamath River downstream from Happy Camp, California and along the eastern margin of the Siskiyou Wilderness Area, this timber sale would have logged off the habitat of four Northern spotted owl pairs by removing 139 acres of Critical Habitat. The project also proposed the “incidental take” (i.e. sanctioned killing through waivers provided by the US Fish & Wildlife Service) of two of the last Northern spotted owls known to be reproducing on the Klamath River, and would have negatively impacted important anadromous fisheries.

In 2020, KFA and our conservation allies filed suit to stop the Crawford Timber Sale and protect occupied habitat for the Northern spotted owl. After filing our lawsuit, the Klamath National Forest withdrew the timber sale and we are cautiously optimistic that the project has been canceled for good. We will continue monitoring the activities of the Klamath National Forest in 2021, and if necessary, we will continue fighting for these owls and the critical habitat they need for their survival.

The Shasta Agness Timber Sale was proposed by the Rogue River-Siskiyou National Forest in the mountains surrounding Agness, Oregon near the confluence of the of the Wild & Scenic Rogue and Illinois Rivers. The area is designated as a Late Successional Reserve (LSR) to protect the habitat of the Northern spotted owl, and contains one of the only documented populations of the threatened Humboldt marten on the southern Oregon coast. The project area contains lush forests influenced by coastal rain and fog, unique serpentine woodlands, old-growth forests, and isolated oak woodlands.

The Shasta Agness Timber Sale proposes to log an estimated 24 million board feet of timber, including over 15,000 large trees between 20″ and 28″ in diameter. Despite the heavy logging proposed, the Forest Service failed to adequately survey for the threatened Northern spotted owl. In July 2020, on-the-ground monitoring efforts by KFA discovered a previously unknown Northern spotted owl population within the proposed logging units. The discovery of this owl is forcing the Forest Service to remove approximately 630 acres of commercial logging units from the final Decision Record for the Shasta Agness project. The agency has also agreed to drop an additional 88 acres of proposed “serpentine pine” logging treatments based on the input of KFA and our conservation allies.

We will continue tracking the Shasta Agness Timber Sale in 2021 and working to protect the forests and wildlife of the Siskiyou Wild Rivers region.

The Integrated Vegetation Management for Resilient Lands (IVM) Project is one of the worst federal land management projects proposed in southwestern Oregon for many years. The project envisions industrial logging throughout nearly the entire Medford District BLM, including 634,185 acres of proposed “treatment areas.” Under the provisions proposed in the IVM Project the agency could log up to 20,000 acres and build up to 90 miles of new road per decade without additional public comment or site specific scientific review. To make matters worse, this project is specifically targeting Late Successional Reserve (LSR) forest designated to protect habitat for the Northern spotted owl.

If approved, this project will impact forests, wildlands, wildlife and fisheries across our region. It also proposes to exclude the public from the public land management planning process. In 2021, KFA will make the IVM Project a priority and will work with grassroots and rural conservation advocates throughout the Applegate, Rogue and Illinois River watersheds to oppose this project.

The Late Mungers Timber Sale is being proposed by the Medford District BLM under the still unapproved IVM Project. Despite no official authorization to do so, BLM timber managers are designing a large timber sale under the provisions of the IVM project in the mountains near Mungers Butte, above Williams in the Applegate Valley and Selma in the Illinois River Valley. The project is not only located in a large Late Successional Reserve (LSR), but it is also located in an important connectivity corridor between the Red Buttes Wilderness, the Kangaroo Inventoried Roadless Area and the vast Kalmiopsis wildlands to the west. The project proposes units in many late successional and old-growth forest habitats and in small unroaded wildlands. These areas contain high conservation value and are important for recreation.

Throughout 2021 KFA will be working with partners in southwestern Oregon to oppose the Late Mungers Timber Sale and protect this important connectivity corridor.

The Bear Grub Timber Sale, located in the mountains between Talent in the Rogue Valley and Ruch in the Applegate Valley, proposes industrial logging on 1,100 acres. This includes 293 acres inside the Wellington Butte Roadless Area (known locally as Wellington Wildlands). The project also includes logging units along the popular East Applegate Ridge Trail, a beautiful non-motorized trail through the foothills of the Applegate Valley. Logging prescriptions include group selection logging, a form of staggered clearcut logging that will increase fire risks, degrade wildlife habitat, and release large volumes of stored carbon. Unfortunately, the project was approved by the BLM and sold at the federal timber auction.

KFA will continue working to STOP BEAR GRUB in 2021.

In 2020, KFA worked with Applegate Neighborhood Network (ANN) to promote our Wild & Scenic Applegate River proposal. We identified approximately 200 miles of proposed Wild & Scenic River on public lands in the serpentine canyons of Slater Creek, the wild headwaters of the Upper Applegate River, the woodlands of the Little Applegate River canyon and cedar lined Pipe Fork Williams Creek. We worked throughout 2020 to document the “Outstandingly Remarkable Values,” map our proposals, promote our proposals, and advocate for the permanent  protection of worthy Siskiyou Mountain streams.

Throughout the summer of 2020 KFA worked to monitor regional wildfires and the activity of fire managers in the Roadless Areas, Botanical Areas and Wilderness Areas of the Klamath-Siskiyou Mountains. We tracked the Slater Fire on the Siskiyou Crest and successfully organized local wilderness lovers to keep bulldozers out of the Kangaroo Inventoried Roadless Area near Swan Mountain and in the Oregon Caves National Monument near Mt. Elijah. We also worked to ensure fire suppression activities on the Devil Fire in the Red Buttes Wilderness Area maintained wilderness and biological values.

We tracked the Red Salmon Complex burning on the Salmon Divide from July 27 to late October of 2020. This fire burned at the headwaters of New River deep in the Trinity Alps Wilderness and in wild tributaries the Salmon River. Despite our advocacy, the Forest Service bulldozed fireline on Packsaddle Ridge inside the wilderness boundary.  In 2021, we will work to document the impact of wilderness bulldozing and fire suppression activities in the Red Salmon Fire Report. 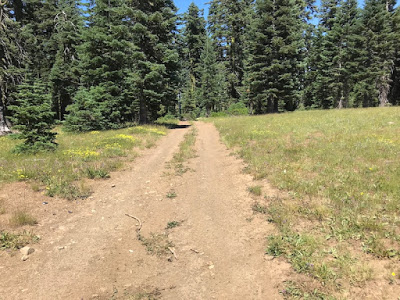 In 2020, we continued our longstanding work to document the impacts of illegal and unauthorized OHV use on federal lands throughout the region. This includes our annual efforts with Applegate Neighborhood Network in the Applegate Valley OHV Monitoring Project. In this particular project we are working on a series of closures in designated Botanical Areas and on the Siskiyou Crest, including routes that impact the Pacific Crest National Scenic Trail on both the Klamath National Forest and Rogue River-Siskiyou National Forest. In 2020 we helped officially closed one illegal route in collaboration with the Forest Service and KS Wild. We also monitored previous closure efforts for motor vehicle trespass. In 2021, we hope to close additional illegal routes on sensitive Forest Service lands.

In 2020 we also petitioned the Wild Rivers Ranger District on the Rogue River-Siskiyou National Forest to secure the closure of numerous illegal routes entering roadless habitats and crossing streams in areas with Port Orford cedar that are currently uninfected by the deadly, non-native pathogen, Port Orford cedar root rot (Phytophthora lateralis). Port Orford cedar root rot is carried uphill and between watersheds in mud on vehicle tires. Once introduced into a drainage it will spread downhill, especially along streams, attacking and killing Port Orford cedar trees. The risk of infection from these illegal OHV routes is extremely high and we are proactively advocating for closure of these damaging routes before it is too late. We hope to see these routes closed or at least approved for closure in 2021.

Finally, we worked to close approximately 3 miles of illegal motorized trail in a small roadless area on the Modoc National Forest located in the Medicine Lake Highlands above Lava Beds National Monument. This route was illegally built through beautiful old-growth lodgepole pine forests and up steep volcanic slopes of pumice, cinder and other highly erosive volcanic rocks to the summit of a spectacular mountain peak. The route was causing severe harm to the surrounding ecosystem and hundreds, if not thousands, of lodgepole pine trees were illegally felled to build the route. KFA documented these impacts and petitioned the Modoc National Forest for route closure. To their credit, Forest Service staff responded promptly with physical closure efforts. In 2021, we hope to revisit the Modoc National Forest to monitor this closure and work to secure more OHV closures.

KFA has been actively engaged in advocacy surrounding legislative efforts in the state of Oregon to address issues surrounding wildfire and forest management. In 2020 we testified in front of the Oregon State Committee on Forests and Fire Management and submitted detailed, science-based comments to proposed legislative efforts affecting the forests of the Siskiyou Mountains.

In 2021 KFA will work towards the protection of worthy streams in the Applegate Watershed with permanent Wild & Scenic River protections. We will also defend against a wide variety of immediate threats to the wildlands of the Klamath-Siskiyou Mountains. From the Wild Rivers Coast to the arid foothills of the Applegate Valley, across the spine of the Siskiyou Crest and into the wild watersheds of the Mid-Klamath Watershed, the Siskiyou Field Office of Klamath Forest Alliance will continue working to protect, defend and restore the natural world. We are among the most passionate and committed advocates of the Klamath-Siskiyou! Please help us defend the beautiful Siskiyou Mountains and consider a generous year-end, tax-deductible donation to support our work. Together we can protect the last intact habitats in the Siskiyou Mountains!